FIND OUT MORE ABOUT MEAD IN WEST GARDINER, ME

More Than a Drink - An Art Form!

Erroneously described as honey wine, mead is a fermented beverage made from honey, yeast, and water. It isn't really wine, because... there aren't any grapes! But you get it, right? It's LIKE wine (only cooler!)

Run Amok Mead is located in West Gardiner, Maine where we make mead on the new moons and the full moons, fermenting the most delicious and delightful ingredients into amazing taste sensations, aligned with ancient tradition.

The history of mead

The history of mead goes back some 8,000-ish years, making it one of the oldest of alcoholic beverages. At Run Amok Mead, we are determined to leave our mark on that history, and to make this ancient beverage new again. You might say Mead is the New Old. (Okay, you might not say that, but maybe somebody would.)

If you'd like to know more about our mead, we hope that you'll visit us soon!

I can hear you asking…

Mazer is just a fancy word for “mead maker”. (Or maybe it’s a name for a fancy cup to drink mead from. There are a number of definitions, ask any mead maker.)

We’ve been inflicting Honorary Mazer status on friends and fans in 2021, celebrating birthdays and moons in true Run Amok fashion!

Thanks to all my Honorary Mazers, for the learning experiences, for the ribbon winners, for the names, ah, the names – mead names that go straight to the heart. Or the funny bone. For the tart, the sweet, the dry; for the golden glow of fermentation through the glass, and now for the hum and gurgle of mead fermenting in stainless steel. 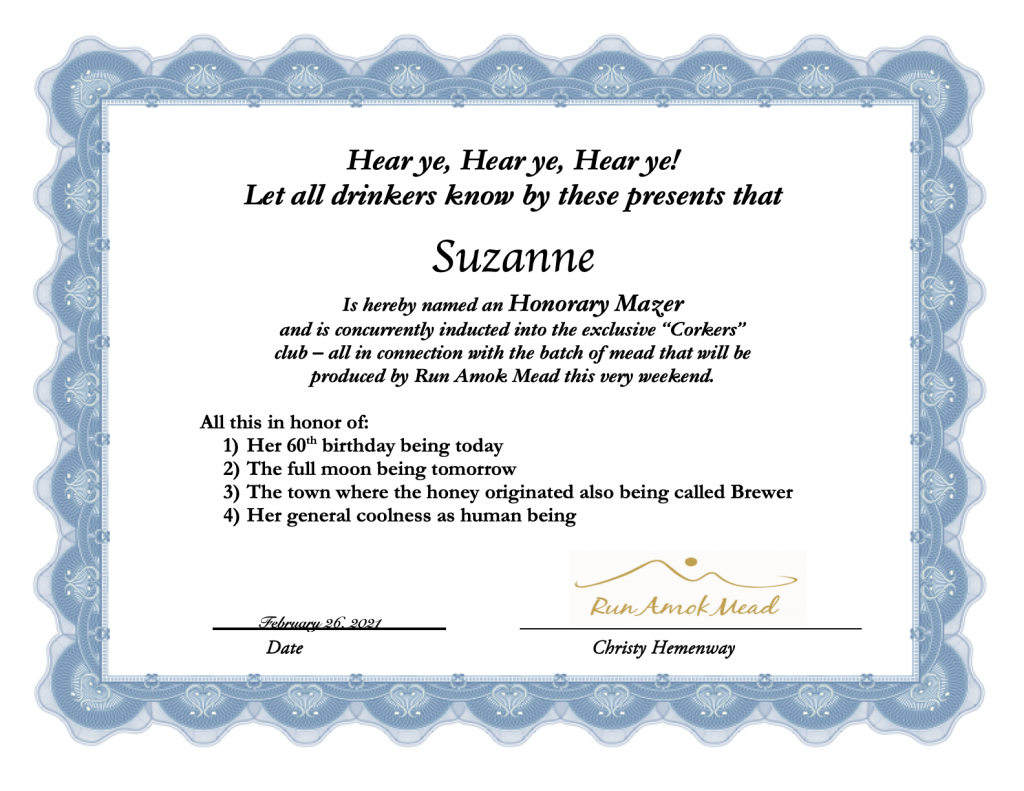 In February, the full moon fell on Sunday, the 28th... There was still a ton of snow on the ground and we celebrated Suzanne's birthday outside in full COVID gear, sitting around the campfire on the snow bench!

Her mead? Cranberries, Peaches, Madagascar Bourbon Vanilla. What did I learn from making this mead? That cranberries are mostly impervious to the decay during fermentation that most other fruits succumb to. Those things were like marbles! 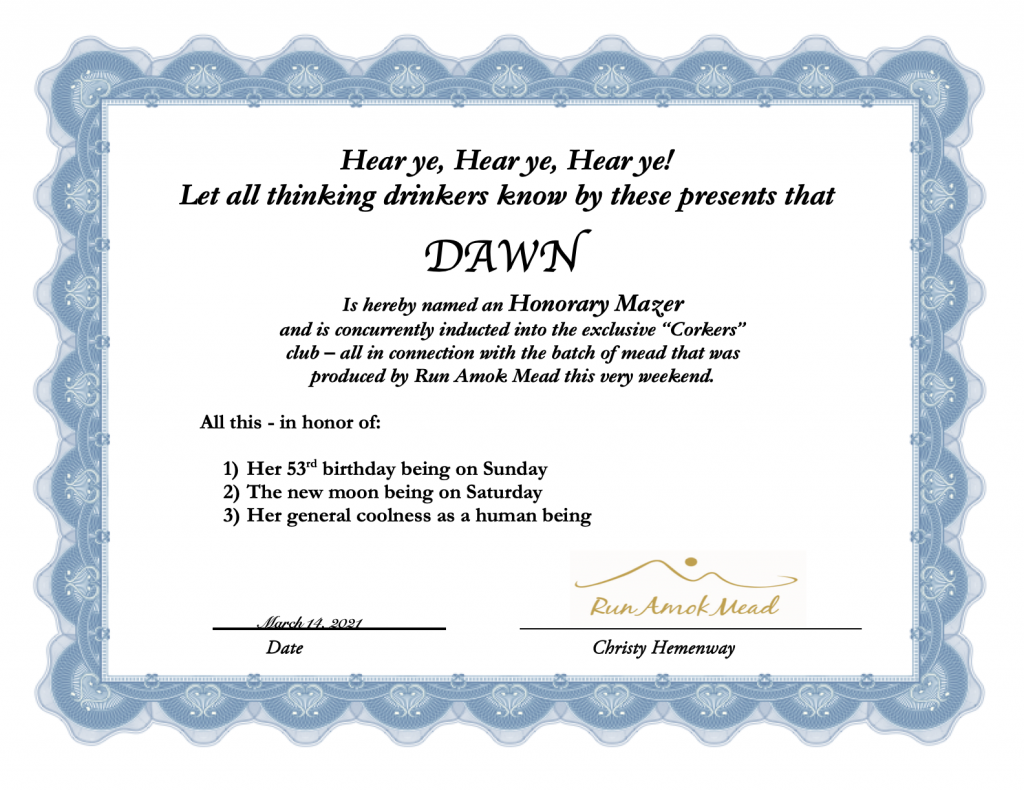 In March, the New Moon came on Saturday, the 13th. Dawn had been wrangling both a new job and new home, when along came all the COVID-craziness. We hadn't talked in a long time. So great to Zoom with you, lady - Happy Birthday!

The mead: 9# of blueberries and 2 vanilla beans. Already so good!

In April, the New Moon was on April 11th, and we knew TWO important birthdays - one on either side of that date! So this month, we bring you TWO Honorary Mazers - Ant and Kissy.

Their mead was fermented using Premier Rouge yeast, known for developing fruit characteristics, and this one contains organic peaches and black raspberries, along with a two-bean dose of Madagascar Bourbon Vanilla. The color is phenomenal -- we can't WAIT to taste it! 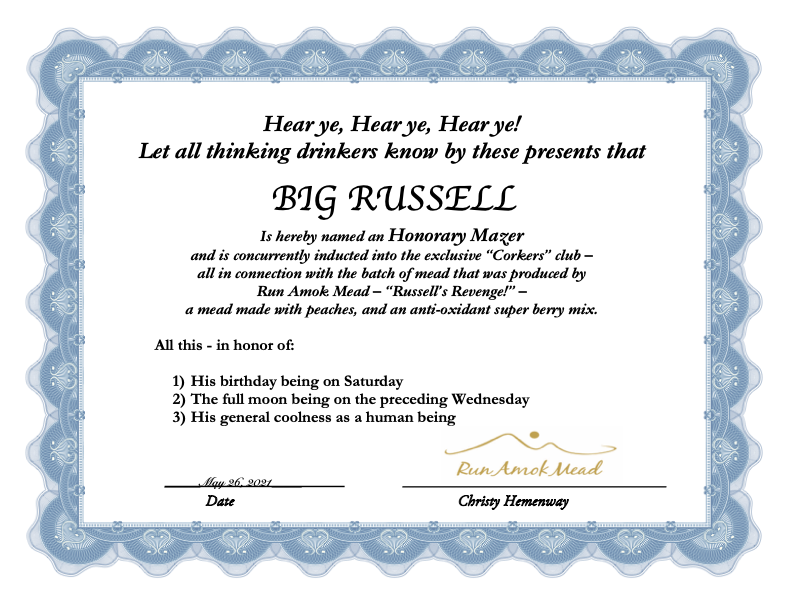 In May, it was Big Russell's turn.

Originally we called this Russell's Revenge, but when the Super Berry Antioxidant Blend turned out to be so tart and sweet and good, (and completely blew away the peaches) we changed it to Super Russell! Another winner in the round of competitions we did during 2021. 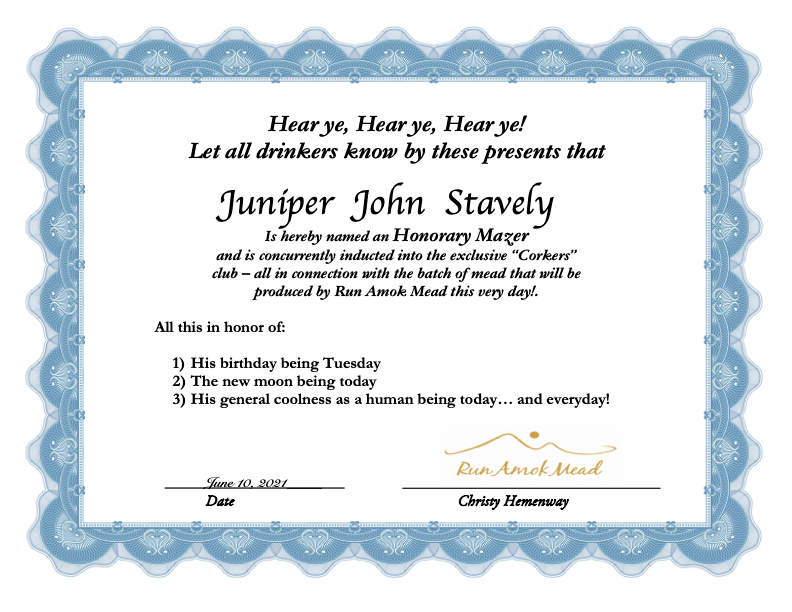 John 's birthday is in June. When I said OK, John - what do you think you might like in a mead? His immediate response was "Juniper!" Now I had never made mead with juniper in it before, so had to learn what it was (it's a spice) and what it looked like (small, hard, dried, dark berries) and then learn how it fermented!

And that all seemed to work out okay, because Juniper John brought home multiple ribbons from the competitions it was sent to. John lives in England, so we are hoping he one day comes across the pond to get a taste of it! (Really, John - it's not that big a pond!) 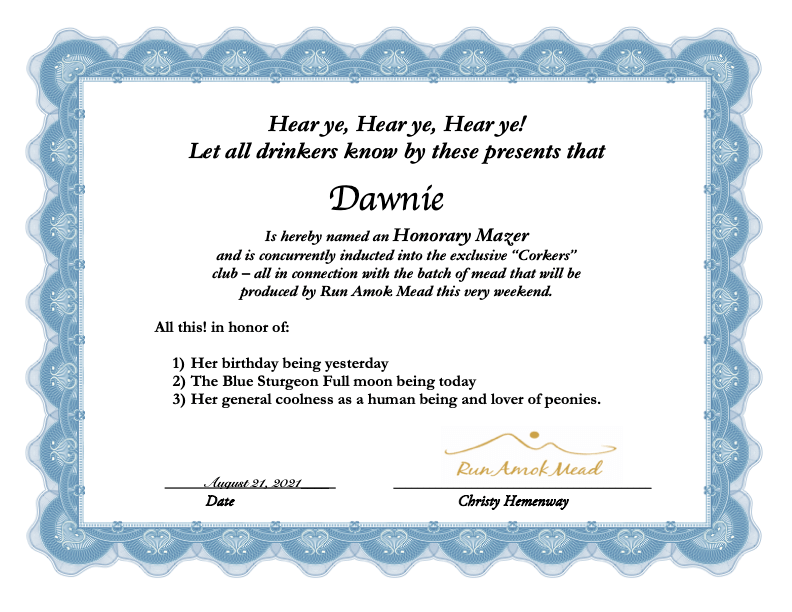 I have a number of friends named Dawn, and in 2021, two of them had birthdays on moons! This Dawn takes her name quite literally - Dawn as in the light of the rising sun, and that made us think of what it takes to get early going in the morning. So of course... coffee would be necessary! Her birthday landed the day before the Sturgeon Moon, which was also a Blue Moon. That had us turning the darned fish blue, so Dawn's mead, made from Guatemalan Coffee Blossom honey became known as Blue Sturgeon Moon. And we made a BIGGISH batch, so we'd have some around for awhile. Cheers! 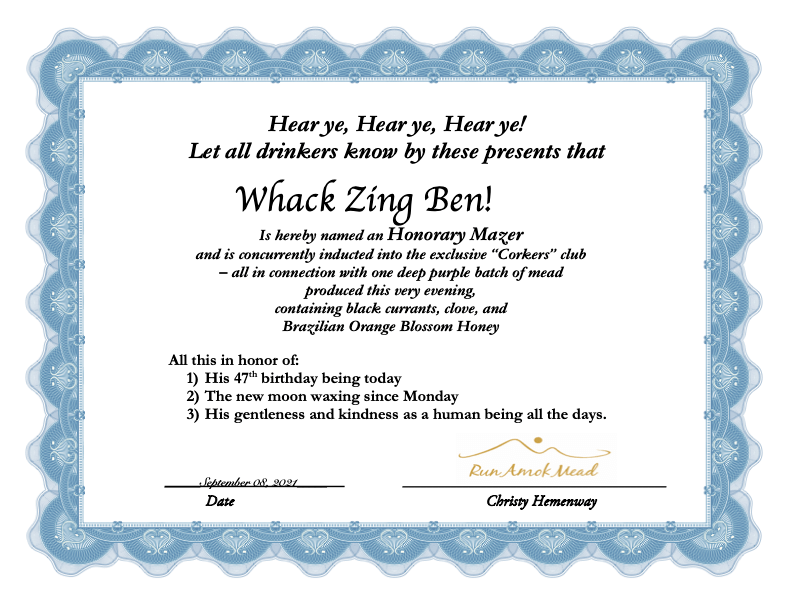 September brings us... Virgos. I seem to know a lot of Virgos. Virgos are probably the main reason I drink coffee in the mornings, because a Virgo is the kind of person who sets up the coffee the night before to go off automatically in the morning. Not me... I'm a Libra. I stumble 'round half asleep in the kitchen WISHING I had made the coffee the night before. In any event, Ben's birthday is in September, and the Brazilian Orange Blossom Honey fermented beautifully with black currants as the moon waxed... bringing us Whack Zing Ben! 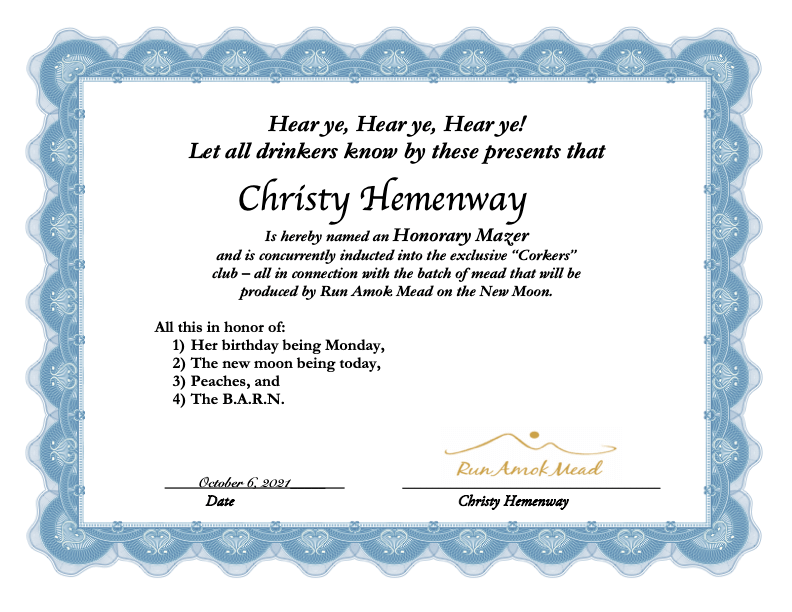 In October of 2021, Geoff and I bought a barn. Well, okay, yes, there was a house too. And we closed on my birthday, so Happy Birthday to me! This is the same barn that will one day soon house Run Amok Mead's tasting room and fermentation facility. Also, I had another go with peaches. This was the first mead made in the new house! So... B.A.R.N. - that spells PEACHES!*

*The habit of spelling a word (B.A.R.N.) and then stating that it spells something else altogether (PEACHES!) is something we've borrowed from Stephen King's character Tom Cullen from the novel The Stand. We live in Maine, ergo, we are die-hard Stephen King fans. Right? K.I.N.G. That spells MAINE!!! 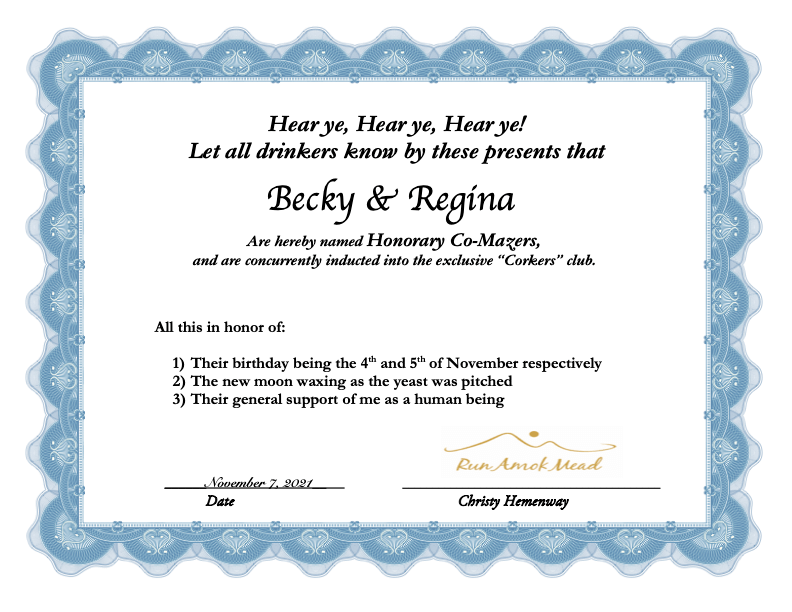 Ah, NOVEMBER! Another month with lots of birthdays lined up with the moon. This time it was Becky and Regina, circling the new moon on the 4th. Both of these women are important mentor figures for me, so mead was definitely in the making! Named after Scathach, of Irish mythology - the Shadowy One, Teacher of Warriors, She who strikes fear! But since I could not get my tongue around the pronunciation of Scathach, she got nicknamed Stryker. This was just a little batch, again with the cranberries, this time fermented with Brazilian Angico honey, and we are sad about that - because it was so very good that it all went away VERY FAST! 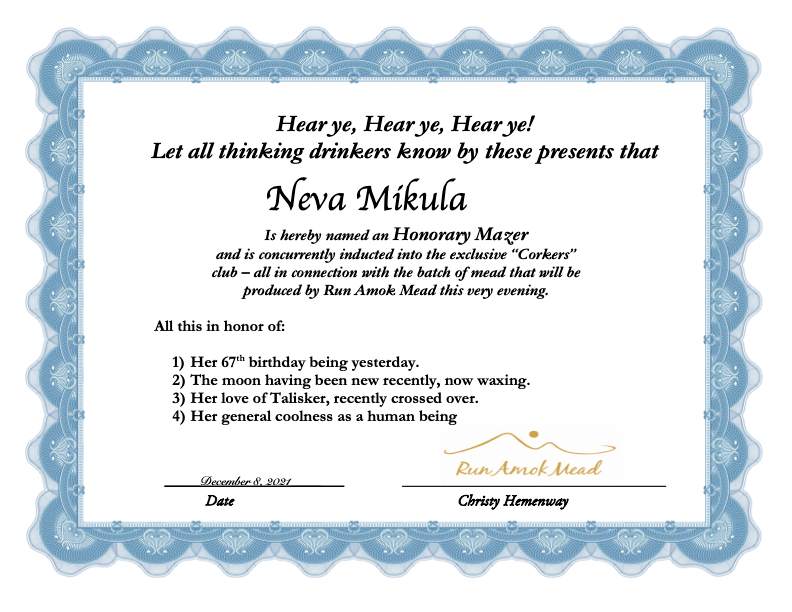 In December, Neva had a birthday! But that celebration was tempered by her feline friend Talisker crossing over the Rainbow Bridge. Neva asked especially if we could name this mead Talisker's Rainbow. We, of course, said, "Of course!" Wild bilberries in Orange Blossom Honey, with rosemary for remembrance.

Amberle and I have only met online, but she sort of feels like a long-time friend.

It was Amberle who knew that this quote made sense.

The waiting being the hardest part, this mead, made with Blueberry Blossom Honey fermented with Lingonberries, is now named ImMEADiate Gratification! Who knew!?

January
In Honor of Rob 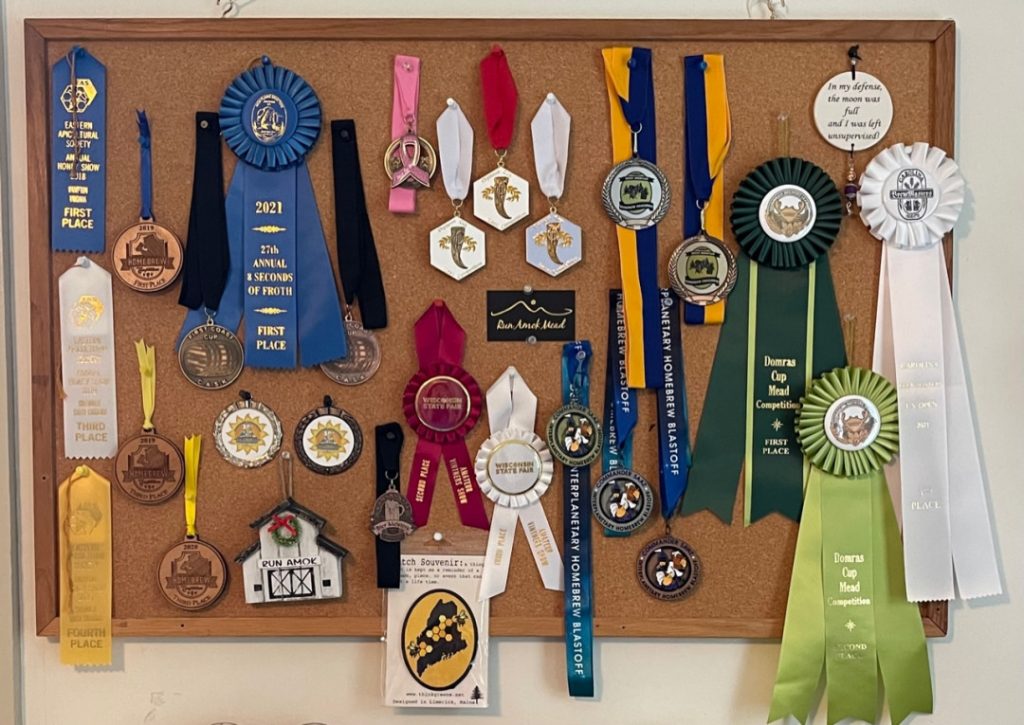 Later in January of 2022, we bought our first stainless steel - a small Delta Brewing 14 gallon fermenter. Then in late January, our TTB permit was granted.

Through a long and winding path, my younger brother Rob, long deceased by his own hand, has been instrumental with being able to manifest Run Amok Mead as a commercial meadery. In celebration of the anniversary of his death, we crafted a traditional mead from Knotweed honey. With honor and respect, we named it Suicide is Painless. If he were still here today, perhaps the association, which we took from M*A*S*H*, the movie, would strike him as meaningful as well.

Our Grand Opening was September 30, 2022, so we are still a little rough around the edges, but we’ve got great stuff started in shiny new tanks, soon to be in shiny new bottles, and it’ll soon be ready to share, so we hope you’ll come, too. Because you know… What could possibly go wrong???

This we do in honor of the beauty of the green earth, and the white moon among the stars…